We’re on the Brink of Cryptopunk

I developed a crypto wallet library for Elixir called cryptopunk. And in this post, I’ll describe how you can use it

Only a few years ago cryptocurrencies were considered “money for nerds”, a technology that doesn’t have any potential. But now the blockchain became mainstream. Artists are selling their art as NFTs, Elon Musk keeps pumping Dogecoin in his tweets, many countries are in the process of developing regulation rules for cryptocurrencies.

Blockchain technology has many usages, but currently, it’s mostly used as a payment platform.

Over my new year holiday, I developed a crypto wallet library for Elixir called cryptopunk. And in this post, I’ll describe how you can use it to accept crypto payments in your elixir projects.

To my surprise, even some seasoned software developers have a vague idea of how blockchain operates. So let me give a brief explanation.

Satoshi Nakomoto who developed the reference implementation of bitcoin brought three innovations together:

In a peer-to-peer (P2P) network, each computer acts as both a server and a client—supplying and receiving files—with bandwidth and processing distributed among all members of the network

A blockchain is a growing list of records, called blocks, that are linked together using cryptography. Each block contains a cryptographic hash of the previous block, a timestamp, and transaction data (generally represented as a Merkle tree).

Proof-of-Work (PoW), requires computational power to solve a difficult but arbitrary puzzle to keep all nodes in the network honest.

People not familiar with cryptocurrencies may think that a crypto wallet stores all your crypto money. But it’s not a correct assumption.

Crypto wallet is an application that has the following features:

There are several types of crypto wallets:

In the first version of the Bitcoin core client (main client) this type of wallet was used. But this kind of wallet is hard to manage, back up and import.

In deterministic wallets all keys are derived from the same seed, the seed is randomly generated data.

So the seed is sufficient to backup, recover and import all your private keys and their associated addresses calculated from public keys.

A special kind of deterministic wallet is an HD wallet. HD wallets allow deriving a tree of keys 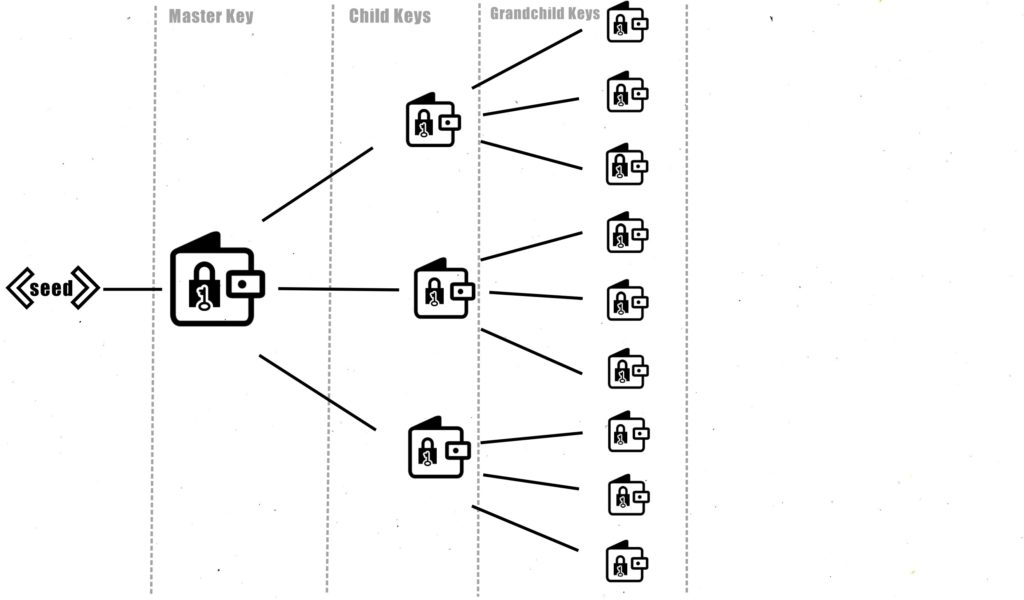 Cryptopunk implements this kind of wallet.

Let’s go over each of them and see how they can be used in the cryptopunk library.

This BIP describes the implementation of a mnemonic code or mnemonic sentence - a group of easy to remember words - for the generation of deterministic wallets.

To generate a mnemonic use Cryptopunk.create_mnemonic/1:

It will generate a string with mnemonic words, by default the number of words is 24. But you can also generate a mnemonic with 12, 15, 18, 21 words.

A mnemonic should be kept secret since knowing it gives access to all your private keys and addresses. But as you can see a mnemonic is easy to backup and import into wallet applications.

The sole purpose of mnemonics is seed generation. To generate a seed from a mnemonic use Cryptopunk.create_seed/2:

You can protect your seed with a password by passing it as a second argument. It will result in the generation of completely different seed data.

To generate a master key from a seed use Cryptopunk.master_key_from_seed/1:

Although you already can use your master key in your blockchain transactions to accept and send payments, it’s not advised to do it. You should derive child keys and use them instead.

These BIPs define a logical hierarchy for deterministic wallets based on an algorithm described in BIP-32. We’ll get to it a little bit later.

Apostrophes in the path indicate that hardened derivation is used.

The main purpose of BIP-43 and BIP44 is to make wallets compatible with each other. But of course, if you don’t need compatibility, you can use any derivation path you want.

To parse a derivation path string use Cryptopunk.parse_path/1:

To derive a child key from a master key use Cryptopunk.derive_key/2:

In practice, you won’t have to think about what type of derivation you should use because BIP-44 already defines a standard way that combines hardened and non-hardened derivations.

The only disadvantage of using Rust Nifs is you have to bring Rust into your project. But on the other hand, C Nifs usually require a couple of dependencies to be installed.

So Rust can be considered just one more dependency.

More currencies and bitcoin address types will be added soon.

Hopefully, this post will be useful for anyone interested in blockchain technology or people trying to integrate them into their projects

The library can be found here.